wishing you a year that ends well,
and a new one
that's fresh-faced
and friendly
and gentle
to you.

changes can come about very quietly or very sudden. my father fell very ill a good week ago. we have no way of telling what the future holds, and to be quite honest: even if there was one, i don't think i would like to know. i'm quieter now and so very glad to have k and my family and my friends. and i'm amazed how close happiness and sadness can be. i saw my dad very poorly and held my six-week old nephew at the very same time.

i'm letting the sad moments in and meeting them with happy ones. this afternoon, i'm seeing my niece, we'll go to town and have hot chocolate.

the photos were taken on a special sunday in december when having lunch with friends, happy memories!
Posted by kristina - no penny for them at 09:13 15 comments: 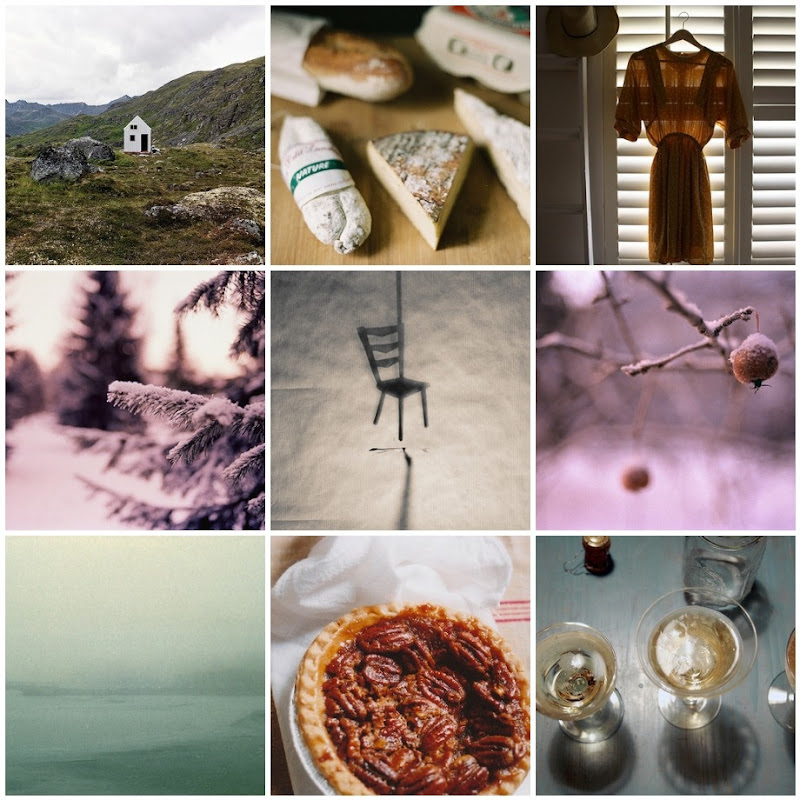 the images in this mosaic are not mine, but the work of some stunning photographers on flickr. click on the links underneath the mosaic to see their photo streams. be inspired!
Posted by kristina - no penny for them at 10:05 16 comments:

at the museum II

some more impressions from the museum, even though it seems like i've been there ages ago. don't you love that girl reading her book - must have been some serious art text she was pondering.

don't forget the giveaway for a print of your choice in my last post (just leave a comment there by wed 22 dec, midnight).

oh, and some exciting news: lovely astrid featured me in her 'why do you shoot film' series over on hei astrid. thank you!

follow my blog with bloglovin
Posted by kristina - no penny for them at 09:02 5 comments:

at the museum I

we went to the museum, and as always, no matter if the particular art in question speaks to me or not, i love the gentle flow that comes with moving along the corridors, looking into the rooms - and looking at other people looking at art. intriguing. i could do it for hours. i'm slightly jealous of that golden bag. but maybe it only works if you have some friends with brown, rusty red and purple sweaters standing next to you? in a space with tall, ornamental charcoal iron pillars?

after lots of work, i met some friends tonight and we ended up in a café with a little concert going on. it really calmed me down and got that smile back onto my face.

p.s.: i'm so looking forward to christmas. does that mean i'm a five-year-old inside? i think it just might.

p.p.s.: do you know what the people up there in the first pic are looking at? hint: it's at the hamburger bahnhof. leave a comment and i'll draw a winner by wed, 22 dec, midnight, to receive a 13x18 cm print of their choice (which should reach you in the new year).

follow my blog with bloglovin
Posted by kristina - no penny for them at 09:29 13 comments:

what a day. it certainly wasn't one of the best. but all's well that ends well, right?

look at what i saw the other day - sadly, the puddle wouldn't behave and stirred in the wind, but you can still make out the string of lights. and: last weekend jo brought me nigel slater's tender (vol. 2) from london. how great is that?

oh, and lest i forget: thank you for your comments recently, they really brightened up my days!

follow my blog with bloglovin
Posted by kristina - no penny for them at 20:05 14 comments:

after a brief thawing episode last weekend, it's been snowing again. this is the real thing.

i'm up to my ears with work. how are things with you? anything lovely or exciting happening lately?

follow my blog with bloglovin
Posted by kristina - no penny for them at 17:44 10 comments:

is there ever a point when we've

i'm not talking about morals, i'm searching for an awareness. too often i only realise when i've far passed that point. and i wish i had noticed the elusive moment when i could have said: this is good. it's enough. let's stop here.

despite my recent philosophical moods (which could have to do with exhaustion), i'm intending to have a fantastic weekend. j and a from london are going to be in town. can't wait. - have a super weekend yourselves!

p.s.: this may sound far more negative than i felt - it doesn't mean at all "i've had enough", it's more a pondering on being content. i'm quite jolly actually (apart from the tiredness)!
Posted by kristina - no penny for them at 09:31 16 comments:

now is just the blink of an eye - there, and gone in an instant. so let's try catching its coat tails before it hurries around the next corner:

now,
you are
coffee being served with a smile at lunchtime
sudden inspiration
beauty in the midst of greyness
the unexpected feeling of being needed
reading and writing
intense time pressure and moments of rest
a cup of tea

the grip of winter

just now, two people skied past my window. true story. i took a slight double-take. after all, i'm living in the middle of the city (more or less, that is). there they were, the dad with proper cross-country skis, the little boy or girl (wrapped up so warm and zooming by so fast i couldn't see his or her face) with miniature skis, but obviously completely familiar with it.

we had rather a lot of snow, you see. and in berlin, only the main streets are cleared, side streets just drown in snow. last year, we didn't see the pavement for close to three months. which feels rather unusual: only a few years ago, we only had little snow - for a couple of days at the most. the weather is noticeably changing.

while i love to see the kids' excitement - making snowmen, riding their sleighs - it does make everything you do more time consuming. i'm thinking twice before leaving the house, since i can only use my bike on the cleared streets and it's a fair little walk to get there, same goes for reaching a bus or train station. i'll get used to it, but at the moment i'm in two minds.

it does look pretty though, doesn't it?

if you're in berlin, don't forget victoria met albert (the shop with the white paper snow flakes) is having an open sunday. also: events at souterrain gallery and supalife kiosk.

follow my blog with bloglovin
Posted by kristina - no penny for them at 10:25 16 comments:

it's been snowing steadily last night, and much of today as well. when i went to the post office earlier, lots of kids were being picked up by their parents from kindergarden and pulled through the white streets on little sleighs. fun!

it's very cold too, around minus ten celsius, and bound to get much colder tonight. so let's just say i'm very grateful for a heated home. and for woolly socks and jumpers. doesn't this one, the one above with the beaded embroidery, look just perfect? seen at victoria met albert. (by the way, they are having special open sundays on dec 5 and 19. read more here.)

how is it looking at your end - and what are you grateful for?

follow my blog with bloglovin
Posted by kristina - no penny for them at 14:05 11 comments: